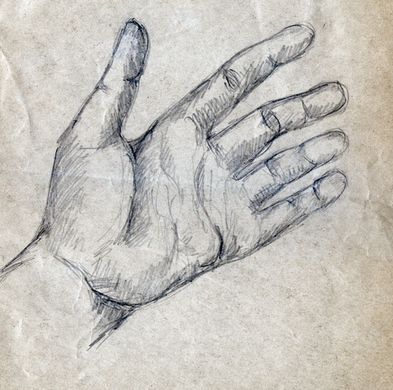 The Love Finger. The fourth finger of the left hand, believed to possess a vein that runs securely to the heart, is the finger we here in the US wear our wedding rings on. The vein of love or more amorously called the Vena Amoris, is from ancient times and is thought to originate with Eqypt. The Egyptians believed that a diamond ring worn on this finger could ignite eternal love.

The earliest known documentation of the vena amoris was accredited to Macrobius 395-423 AD (before a circulatory system was even known!), he implies in his work of fiction that the vena amoris is more magical than physical. Christian philosopher and historian Saint Isidore of Seville (c.560-636) wrote during the 7th century of a Roman story telling of a vein connected to the heart and the bond of love. A thousand years pass and we hear more of the vena amoris, Henry Swinburne's ‘A Treatise of Spousal or Matrimonial Contracts', was published in 1686, in this assuredly lively legal paper, he supports the ancient Egyptian connection albeit without provenance.

In the 16th century England’s King Edward VI by edict made the left hand ring finger the official choice for the wedding band, prior to this wedding bands in England had been worn on the thumb. The Gauls and the Britons wore rings of betrothal on the middle finger. People throughout history have worn wedding rings made of hair, bone and metal, on the right hand ring finger as well as the left, both claiming to have a connection to the vein of love. In modern times the left hand is still the traditional choice, though in some countries like Poland, Colombia, Greece and India the right hand honors the ring, I remember this in Spain too. Wear your ring where you like, it's not the convention but the conviction that counts.

Shop our Ethical Engagement Rings and put a diamond on your loves Vena Amoris and enjoy ever lasting love!